To very briefly explain general concepts, two different example FDDC rules are pictured below. On the left, the actual path is below the plan ([VD] is <LOW>) and not progressing much ([RCVD] is <ZERO>) so <BUILD_SOFT> is fired. On the right is a different scenario in which the actual path is above the plan ([VD] is <VERY_HIGH>) and ([RCVD is <NEGATIVE_BIG>) so <LEAVE ALONE> is fired. 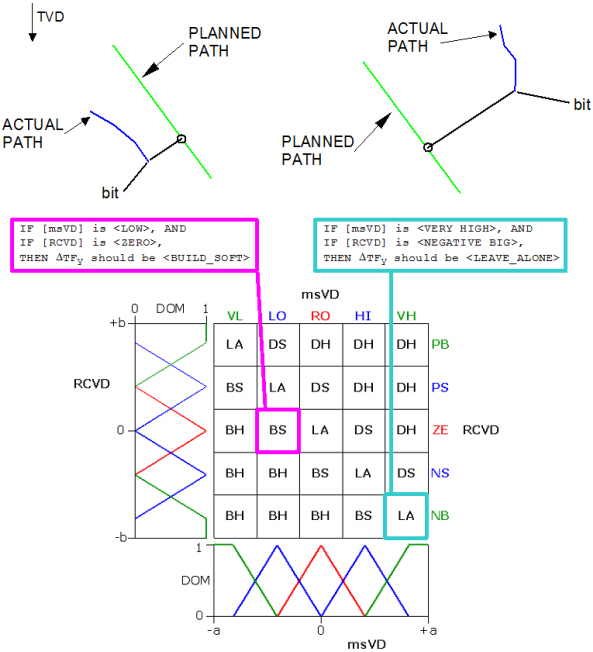 There's nothing fuzzy about the logic as the two preceding example rules match common sense. There are 100s of rules in FDDC and each can be isolated to basic fundamental steering concepts that humans apply each day without hesitation. Input and output terms are described with Fuzzy Sets and Fuzzy Logic is used to calculate resulting steering guidance.

Rewind to the 1990s...A directional drilling simulator was originally created with which to design FDDC. The simulator was a 3D finite element model incorporated with a drill-ahead model. The finite element model was a static analysis of a rotary-steerable bottom hole assembly. The drill-ahead model was based on laboratory data and a simulation model proposed by Millheim and Warren in 1978 and Brett et al. in 1986.

Progress was slow. In the beginning the design efforts experienced all of the common problems associated with complex controllers: well path instability and controller-parameter sensitivity. THD and FDDC were being invented simultaneously.

All nine smooth well bores were "drilled" with the same FDDC. FDDC parameters were kept constant in all cases, while initial conditions, well plans, and formation parameters were significantly varied. The performance suggests generality and the right overall design structure.

Every controller has parameters that directly affect the computed output and those parameters must be tuned. Classical controllers (e.g., P, PI, PID) typically have a very small number of parameters, therefore, "choosing" or tuning to find the "right ones" usually does not result in a general controller. In other words, take a tuned classical controller and simply change the initial conditions and directional control performance becomes heavily degraded. FDDC has more than one hundred control parameters but common-sense human intelligence gets most of them "close-enough" and the remaining few are tuned. That's the power of Fuzzy Logic rule-based systems.

COMMERCIAL APPLICATIONS THAT USE FUZZY LOGIC

10000s of documents have been published about Fuzzy Logic theory and applications. Searching on "Fuzzy Sets" at Amazon.com returns over 1000 books. Even decades ago several industries had successfully applied Fuzzy technology to solve real problems for commercial benefit. See the dated table below that lists commercial applications that employ Fuzzy Logic. The sources are: